Home » The Untold Moral Of The Rabbit & The Turtle Story

The Untold Moral Of The Rabbit & The Turtle Story 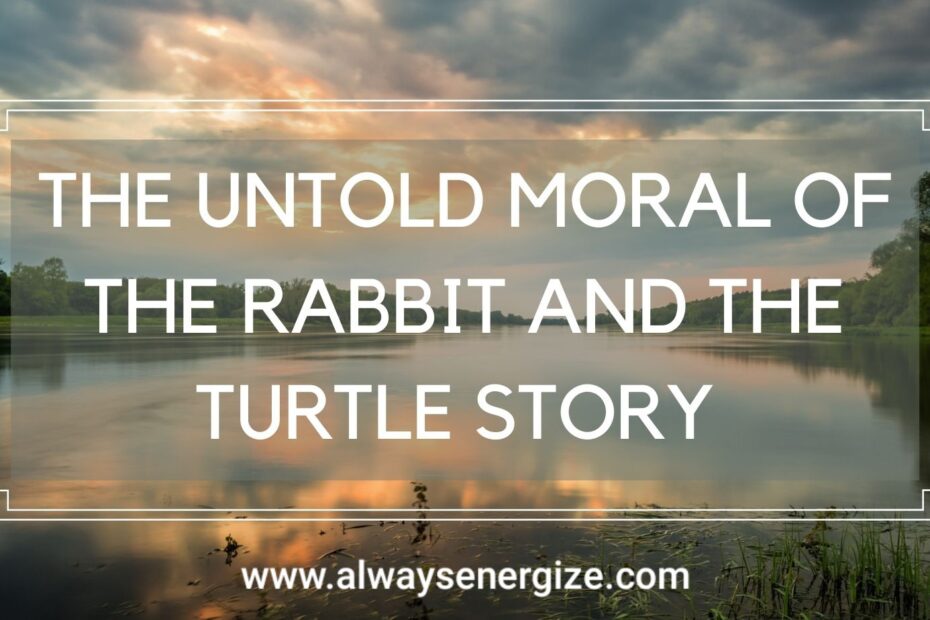 Hey friends, We all loved to listen to stories in our childhood, even today, when someone tells us a story, we listen to them with curiosity and excitement that what next is going to happen in it. We love watching movies that have a perfect storyline. There are always some values from several characters in the story that we can apply in our lives. There are many hidden morals that we are not told about or we are unable to find them. In this blog, we will discuss the untold moral of the rabbit and the turtle story.

This famous story that we learned in our childhood gives us a lesson that “ slow and steady wins the race.” If you haven’t read that story then no worries, I have summarized it for you.

” There lived a rabbit in the jungle who used to show off his speed. One day a turtle was passing by and the rabbit started making fun of him and challenged him for a race. The turtle accepted the challenge and the next day they had to compete. When the race started rabbit was running very fast and the turtle was very slow. After running halfway, the rabbit realized that the turtle is left far behind him. So, he is going to win the race very easily, hence he decided to sleep for a while. He went to sleep and the turtle kept on moving without pausing for a moment. When the rabbit wake up, he realized that the turtle was about to win the race. So, he started running faster, but as soon as he reached the finish point, the turtle won the race. The rabbit realized that his ego lead him to his failure.“

But, this moral is irrelevant in modern era, as the world is changing rapidly and new technologies emerge every decade. Hence, we need to be fast and constantly improve our pace. The main aim of writing this blog is to make you realize that although the story is telling us to continuously work for our goal, it fails to give us a crucial lesson of keep growing and increasing our pace towards our goal. To make my point clear, we can divide the world into three categories of people.

We need to understand that both rabbits and turtles were far different from each other. We also know that being a turtle we cannot compete with rabbits, because the rabbit lost only because of his egoist behavior and not because the turtle was slow and steady. My only motive to write this blog is to make you understand that becoming a turtle is not possible for everyone, as only 5% of people in the world belong to the category of rabbit. So, if you can’t become the rabbit, then must try to not become the turtle at least.

I hope that now you would have understood the untold moral of the rabbit & the turtle story. There are several stories we listen to in our daily life. Hence, we need to find some morals from them and learn to implement those moral values in our life and make our life better.

Check out our other blog : Things That Will Make You Stand Out From The Crowd